Royalty should have it's perks, right?

Today I turn my blog over to royalty. I was approched by this young lady after she had endured a horrific ordeal. Her family was moving into a brand new castle and she had to leave the only castle she has known She has lots to say about it. Please leave a comment to show her your support. Either way, let her know that you read her post. 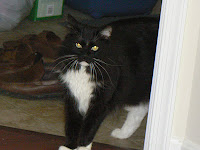 It all started in October when they decided that they needed a bigger castle. Now, the previous castle was just fine by me. I had the run of the place and I had the best hiding places ever. I had toys, although I found more fun in tormenting them, than actually playing with those stupid things that they unsuccessfully bought time and time again in an attempt to placate me. I didn't want for anything and I was the Princess in my castle. Of course my mother was the Queen and sometimes she would turn over her reign to me when she invited people over. Slowly, I started seeing things leave the castle and never come back. Then came the day when the castle was over-run by those fur-less beings. Two days later, it happened. The Queen cornered me in the room with the water in the bowl and the massive cold bed. I thought she wanted to keep me company as I prepared for my nap and then it started. She tried putting me, ME, in a box! What was happening! Why was she doing this. I fought a valant fight but alas, she won; she wore me down, but not before she bore some severe battle scars. (yes, she had to find some of the stuff and rub it on her arms.) I digress. She puts me in the box and then we are going outside! OUTSIDE! I am not an outsider, I need the comfort of that cool air that blows from the ceiling and I need the comfort of my space with those two big boxes that swish water but I can never see it. She puts me in the bigger box with black things that make it move (momma said to stay away from those things, they are dangerous)and then we start to move. I see my castle fading away and then it's gone. GONE I tell ya!. Where are we going...what is she going to do with me! Now, I've heard stories. Nothing prepared me for what happened next.
We arrive at a smaller castle, one with a fluffy in the common area; where I don't have any privacy, for you know....my own needs. Well if she expects me to get out of this box, she has another thing coming. That night, I finally come out and wander around for a bit but this place is not my kind of place, so I retreat, to the dark space under the fluffy. I refuse to eat until I am put back in the place fit for a princess and the queen better recognize this! I...I..I'm sorry but the inhumanity of it all....

Sorry folks, the princess is having a moment and after she composes herself, she will continue...check back tomorrow for the rest of the story.
Posted by Author B Swangin Webster at Tuesday, May 22, 2012