Thrillerfest...and yes it was a THRILL

Where should I begin?

Well I could start with the trip to New York. Also a great time. This year I traveled with Intrigue Publishing as this was the year that they wanted to let everyone know about this new publishing company. 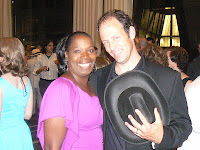 I could start be telling you about the wonderful panels I was in; like, how to write humor in your work which was moderated by Karen Dionne and one of the panelists was Mr. Brad Parks, author of Faces of the Gone. Great novel; and no, I'm not just saying that because I know him and he is cute AND he won a Shamus Award...It really is a great book. 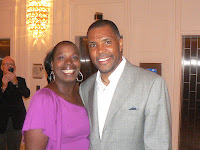 I could be telling you all about Eriq La Salle, yes from ER on NBC. I could be telling you that he is cuter than ever or that he has a voice that drips sexiness from it but I'd rather tell you about his new novel, Laws of Depravity which he wrote based on the accounts of the mass murder of the 12 disciplines of Jesus but set in present day.

I could be telling you all about the Melodie Johnson Howe who was the witch on Bewitched who fell in love with Darren. You can't even imagine when I walked in the room and saw her, my mind instantly went to, "OMG (yes I really did say it) that's the witch that cast the spell on Samantha's husband." Then when I got to take a picture with her...again...OMG!

I could even tell you about meeting Jon Land. Yes, author of Strong Justice and he is a cutie pie as well. I got his book and sent him a friend request the next day and history was made..OK, not history but another friend was made.

OK, well my night wasn't only spent with the cute guys. I actually did talk about myself and got introduced to Steven James. Well actually we were 'breakfast buddies" on Saturday morning and his book Queen was nominated for an award on Saturday. Oh, Steven is an editor and writer for The Writers Digest Magazine.

I could be telling you all of that but what I really wanted to tell you was that I had the best FUN of my life meeting new authors and seeing old friends and making new friends. I had a ball talking about my writing and listening to other writing styles. Oh, and I learned that Brad Parks is a 'pantser" so take that all of your 'outliners". Why is that important you may ask, it is because I am a PANTSER and proud of it. Don't know what it means...well you will need to read my blog in a couple more days to find out what that is.

How is that for a cliff hanger?
Posted by Author B Swangin Webster at Thursday, July 26, 2012