Who do you hang out with?

That is the question you should always ask yourself if you are not surrounded by authors at least 3-5 hours a week or 1-3 days out of the month. Who do I hang out with? Well, I hang out with Author Brad Parks.
I was introduced to Brad (yes, I'm calling him by his first name)about a year ago by another very well known author, Austin S. Camacho. (more about him in a later blog)
I have always thought of myself as a 'go-getter', a social butterfly and yes, even an author 'groupie' (#don't judge me)
However, as an 'author groupie' I have put myself in places to meet the Brad Parks, John Gilstraps, Jeffery Deavers and Austin S. Camacho's in the literary world. Where else would I be sitting in the same room as J.A. Jance and Jeffrey Deavers, listening to them tell jokes and talk about their writing process. (Never heard of J.A. Jance...well shame on you and now you have a homework assignment.
So imagine when I walked up to Brad and said, "hey handsome, can a lowly girl like myself get a picture with someone of your caliber?" and then just for good measure I threw in a sad puppy face and he said, "sure". SCORE!
Now a little about Brad, since I am now one of his most favorite author's. Well, I'm one of his favorite people, OK, well I surely have to be his most favorite author in stilettos.
Brad Parks' debut, Faces of the Gone, won the Nero Award for Best American Mystery and the Shamus Award for Best First Mystery. In doing so, Parks became the first author in the combined 60-year history of the Nero and the Shamus to win both awards for the same book.
Now that should tell you something. Not only am I hanging out with celebrities, but I am hanging out with people that have won awards. (secretly I'm plotting to get that Shamus award but I heard that he has in under lock and key and with a 24 hour guard, and we won't even talk about his interns, but I think I can take Zach...shh, don't tell him I said that...but hey; they have got to sleep sometimes, right?

So, I'll ask you the question again...who do you hang out with? and just in case you don't believe me, check out my picture with Mr. Brad Parks yourself, and notice my belt...I told you, I'm a social butterfly. 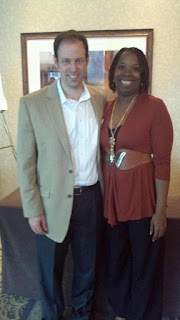 Posted by Author B Swangin Webster at Friday, April 20, 2012